Our mission is to live out the Gospel of Jesus Christ in a healing community of love by nurturing one another through prayer, worship, Bible study and compassionate concern and to send His disciples beyond our walls in Christian service. 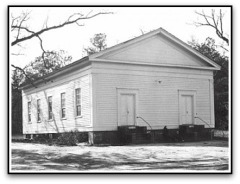 As early settlers moved across the vast wilderness that was Georgia in the early and middle eighteen hundreds, they carried with them the religious beliefs that had first begun in the heavily settled coastal area around Savannah. One of the most profound of the religious beliefs was that of Methodism, brought to early Georgia by John Wesley barely eighty years before.

As folks began to settle in the area that is now the southern part of Jones County, the need developed for a solid and strong church that was nearer than the county seat of Clinton or the booming, new city of Macon. So, on October 13, 1860, Peyton T. Pitts, Jr. took it upon himself to purchase three and three-fourths acres of land near “the crossroads” of Irwinton and Milledgeville roads and there built a Methodist Church, dedicated to the worship and service of God.

Records indicate that Mr. Pitts, then a member of the Clinton Methodist Episcopal Church, set out to build the finest church in Jones County.  Using a good deal of his own money, and contributions from many dedicated Christians of the area, work on the church began.

Much of the building of the church was done by a highly skilled craftsman named Owen Bostic. Bostic’s great care in the project can still be seen by those who worship at Pitts Chapel today, as the original and unusual pulpit and handmade pews are still in place.

During the War Between the States, the gun factory located at Griswoldville, near Pitts Chapel, became a target for General William Sherman’s army. Pitts Chapel, erected with such joy and faith just four years earlier, was commandeered by the Union general as a hospital for the wounded. When the Calvary departed to continue in a sweeping march to the sea, the area was devastated, though Pitts Chapel Church still stood.

Following the war, much energy went into the rebuilding of southern life, and the church experienced growth. Finally, in 1867, the church was dedicated with a sermon from Bishop George F. Pierce. Pitts Chapel was in the North Georgia Conference until 1918 when it was transferred to the Macon District, South Georgia Conference.

The little church held its own, but without much growth, until 1944, when an evangelist visited and rekindled the spark. Unable to afford a fulltime preacher, the church survived with the help of Rev. M. E. Wells, a Baptist minister who, along with his wife, started a Sunday school in the chapel on Sunday afternoons. With their help, the Pitts Chapel flock grew and began to expand its interest again.  The church has been on the charge with Cross Keys, Swift Creek, and East Macon Methodist Churches at different times. It was not until the 1960’s that Pitts Chapel first had its own minister.

The church has grown since that time.  Two Sunday school wings have been added to the building, a separate Fellowship Building with kitchen, and later a vestibule and steeple. In 1962, the church cemetery was begun. Improvements have continually been made to the facility to include air-conditioning, carpet and vinyl siding. There is now a paved parking lot and landscaped grounds, courtesy of Martin-Marietta Rock Quarry, which is located across the road.

Though finances have sometimes been difficult, the people have bonded and worked to preserve this historical church.  The United Methodist Women and the Methodist Men’s Club are both strong arms of the church. The Pitts Chapel congregation believes strongly in missions, locally, nationally and globally.  Opportunities for ministry, great and small, are offered so there is a place for everyone to serve.

Pitts Chapel Church has been making disciples in its congregation and community for over 150 years and still going strong!